On Sunday, March 8th, 2020 at 5pm in the downstairs theater at The Savoy, The Passing Project will host a special showing of the film ​Passing​. After the film there will be a Q&A with Co-creator Tracy Penfield, Musician and Composer Carl Papperman, Dancer Ali Palin. This will be followed by a reception with light hors d’oeuvres. Wine will be available for purchase.
Buy tickets here: https://www.savoytheater.com
Facebook event: https://www.facebook.com/events/228470018173059/
————————–
Who
The Passing Project was created by Tamara Hurwitz and Tracy Penfield who danced together in Bozeman, MT, in 1981 and 1982, a brief two years that created a lifelong friendship. They each went their ways in terms of dance and life, and in 2012, Tracy said to Tamara, “Let’s make another dance, while we still can!” It became apparent that the theme of dying was now prominent for each of them: Tamara’s parents had both passed in recent years, her father only a half year before; Tracy had 4 friends who passed with cancer within the past few years. After Tamara spoke her father’s passing story, Tracy remarked on how beautiful it was and how rarely people share passing stories. True, they are not all pretty or smooth, but they can be important to know and to pass on. They had their theme for the dance: Passing.

What
The Passing Project will be hosting a special screening of their film Passing, which is a live recording of their performance piece also titled Passing. Followed by the film will be a Q&A with
Co-creator Tracy Penfield, Musician and Composer Carl Papperman, Dancer Ali Palin , which will then be followed by a reception with light fare.

When
March 8th, 2020 at 5pm at the Savoy Theater in Montpelier VT. Tickets are $12 and can be purchased ahead of time on the Savoy’s website or at the box office.

About the Film
Tamara Hurwitz and Tracy Penfield are mature dance artists and choreographers who began exploring the idea of passing in 2012. They asked themselves “What has been passed on to us? What will we pass on? What are our Passing Stories?” ​Passing​, the performance, had its premiere on April 28, 2018 at Chandler Center for the Arts in Randolph, Vermont, which commissioned the work. The Passing Project is holding a special event where we will premiere the film ​Passing,​ a live recording of that first show at the Chandler.

The film, shot and edited by Jay Beaudoin, encapsulates the vision and art behind The Passing Project and brings out the beauty of the performance. The piece is 77 minutes in length, a full-concert work. ​Passing ​is performed by seven dancers and four musicians onstage (cello, guitar, accordion, clarinet, flute, keyboard, voice). It features a set of hand-netted linen forms, created by Tracy. These forms represent the veils between the worlds, which part when a being is passing. When they part, one enters what Celts call the Thin Place. It is a place of transformation, of spirit, of soul. One may be accompanied to this place by a loved one in the living world and/or beckoned by one beyond. 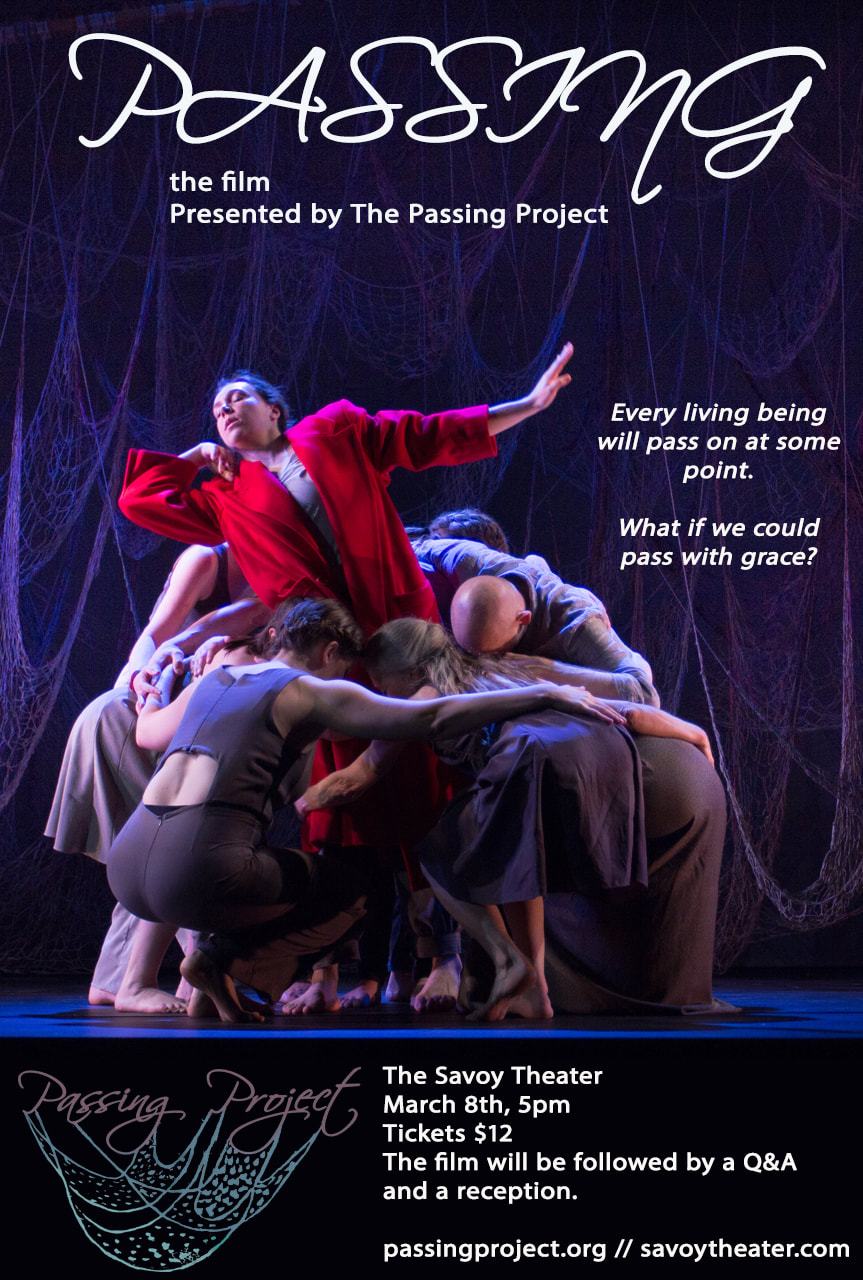